Professional Nerd Portfolio and Blog
I Am Your Father

Ok, so it turns out that wasn’t my last pregnancy post after all!

We are now one week from the due date and things have become… ‘interesting’. 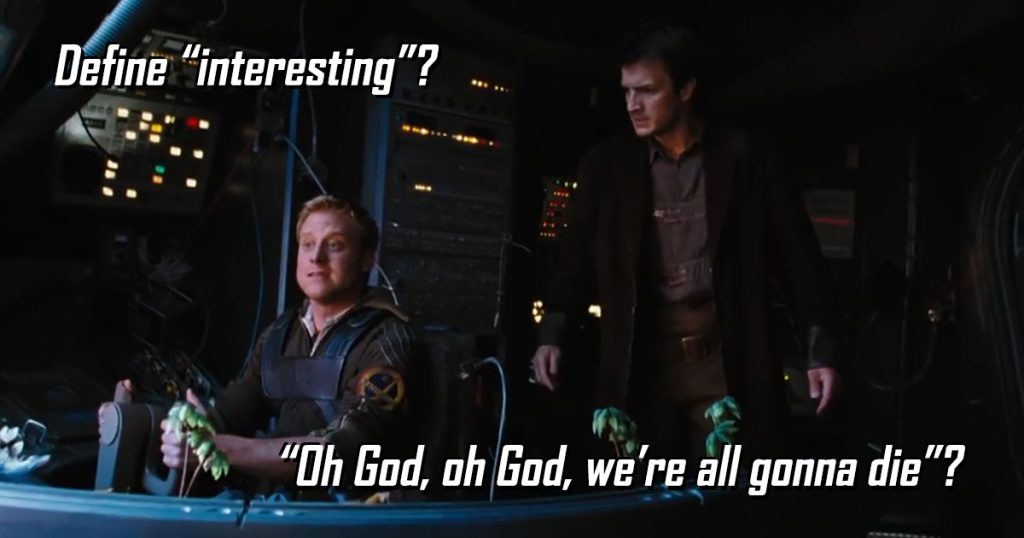 It’s now 15 days since I was told to start self-isolating, mainly for m’wife’s sake, and nearly three weeks since her maternity leave started (which, in a strange way, was possibly quite good timing!).

M’wife’s condition is best described as “fat and uncomfortable” (her words not mine!). She’s had a few wobbles recently, but then haven’t we all! All in all, I think she’s handling it remarkably well in the circumstances and fortunately (I hope), I’ve been there to support her 24/7. She’s also been experiencing a wide array of new aches and cramps and other assorted pains, but apparently that is all normal and can go on for weeks before the little bugger is finally born (though that is not much comfort to her, as you can probably imagine!).

Her midwife appointments are more regular now, but everything is still ticking along fine. The little fella is at least facing the right way now, which is good news, but he’s showing no signs that he’s ready to make his appearance… yet!

Of course, the big news is that we are on lockdown, just like everyone else. I know we’re all in the same boat and that the virus is causing a lot of inconvenience for a lot of people, but expectant parents have their own unique range of issues to deal with. Oh, don’t get me wrong, I completely understand why they’re doing it, but it’s not making what is already a pretty anxious and uncertain time any easier.

Our NCT classes have moved online with some success, though we didn’t get the kind of support and social interaction that we would have received in person. On the (arguably) plus side, we did avoid having to do some of the practical sessions, which apparently involve marmite and a plastic doll, but that also means that we are less prepared to look after him when he arrives. The lockdown also means that we can’t go to coffee mornings or baby sensory classes with the other couples or do any of the other things that are done mainly to help new parents stay sane!

Then there’s the medical stuff. M’wife must go alone to any midwife appointments or trips to the hospital for any additional scans etc., which is understandable and fine, as long as there’s no bad news to deal with!

They have changed their policy so only one birth partner allowed in the delivery room. This shouldn’t change, as the presence of a partner can reduce the need for interventions, plus the wellbeing of mother and baby has to be more important than the minimal increased risk of spreading the virus, but, on the off-chance that anyone is actually contemplating banning birth partners altogether, I encourage you to consider signing this petition. As I’ve said, I understand why the restrictions are necessary, we need to protect our frontline NHS staff, but the added risk of someone else who already lives in the same household as the expectant mother coming onto the ward is negligible compared to the effect of the current regulations on the emotional and physical wellbeing of both partners (let alone stricter ones!).

Once the baby is born, I am expected to leave. Visitors (including partners) are no longer allowed on the recovery ward, which means that, even if all goes well, m’wife is facing the prospect of multiple nights in hospital without any visitors at all. I’m less concerned with that as, on the bright side, I would be able to get some rest and get stuff ready in the house before she brings him home (that is, assuming I can get any sleep at all when my wife and newborn son are still in hospital!). As long as I can be there for labour, the birth and a few hours of aftercare.

I just hate the idea of not getting to properly meet my son, or help care for him and his mother in the aftermath of birth, until several days later. I know that, in a few weeks time, we will (hopefully) both be back at home with a healthy baby and all these worries will be in the past, but this is an important, life-changing and already stressful time, without making it worse unnecessarily.

Then, when they do return home, we will be raising the baby alone, without any visitors or support from our friends and family for several weeks (or more), on top of the prospect of a potentially even tighter lockdown in the near future. Looking after a newborn is widely regarded as one of the most difficult things you can do and that’s with assorted grandparents, cousins and mad ‘aunts’ coming round to help. And, as if that wasn’t bad enough, health visitors and midwives are minimising physical contact too.

As I said, I understand why, and a lot of it is outside my control, but it just sucks. As you might expect, I now have even less sympathy for all the people with no imagination who are still complaining about being bored!

So, that wasn’t quite what I was expecting to be writing a week before our son’s due date, but there it is. I understand why things have to be the way they are, but with social contact limited, it’s nice to get some of that off my chest!

We can only hope that all goes well and, hopefully, by the next update he will finally have been born and hey, at least neither of us will be bored by then!!