This week saw Valve (the developers behind games like the Half-life series and the Steam network) announce their new set of technologies that aim to bring the Steam gaming experience into the living room. Whether their intention was to simply expand their empire or to throw the gauntlet into the “Next Generation” of the console war, for me they’ve pretty much already won against the PS4 and the Xbox One. All without any fancy launch events and without announcing any new games or pointless motion-control gimmicks! Here’s why…

Steam in the Living Room

More details can be found on Valve’s Announcements Page, but let me summarise the news briefly. Valve announced a new operating system (‘SteamOS’), which will be available on ‘a number of devices’ (or ‘Steam Machines’). They also said that they were developing their own console in-house that would ship with a very funky looking and advanced controller. The controller is allegedly compatible with every game on Steam, including old PC games that weren’t designed for controller support. The SteamOS is Linux based, but even if games aren’t compatible with Linux, you will be able to stream games from your PC, again meaning that you have access to every game in your Steam Library and Steam’s Extensive catalogue of modern, classic, retro and indie titles. 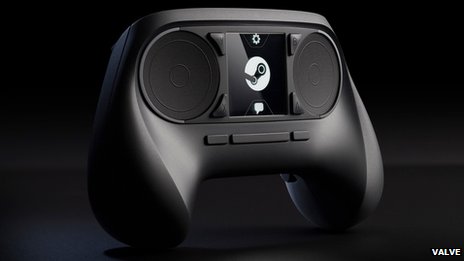 But what does all this mean? I think the best way to explain my excitement about this news is to compare Steam Machines to their next-gen rivals: the PS4 and the Xbox One. [Note, I’m not mentioning the Wii U as, though it is regularly mistaken for being the first next-gen console, it is barely Last Gen; it was just incredibly late to the party!]

One of the big differences is that the PS4 and the X-bone have pretty much shunned all concepts of backwards compatibility. This means that you cannot play any PS3 or Xbox 360 games on the new consoles. And, to be clear, that’s not just games on physical disks, but also any digital games that you’ve bought on PlayStation Network or Xbox Live (a practice that has become more popular for smaller titles, remakes and classic games in the last few years). This, to me, is insane as players looking to upgrade will lose access to all their current games (so you can’t really call it upgrading – if you trade it in, you lose it all!) and it also means that next-gen players won’t be able to download (and give Sony/Microsoft money for) any games that are designed for the current-gen. Developers will have to update and re-release their titles to make them available.

Sony and Microsoft claim that it is because the hardware architecture is different, but this isn’t really an excuse. My flatmate can write a PS2 emulator for PC in his spare time, I’m sure Sony and Microsoft with all their resources could easily write an emulator for their OWN DAMNED CONSOLES. They have hinted that they may add it in time, but it might never happen and that’s no consolation to people looking to upgrade on day one.

Meanwhile, Valve seems to be doing everything in their power to make all of your Steam games and save files available to you on the new living room platform. Steam is now available on Linux PCs and many games are making the transition, meaning they will run on the new Steam OS, but as I mentioned earlier even non-Linux-compatible games can be streamed to the Steam Machines from a Windows PC. Admittedly not everyone will have access to a gaming PC to use in this way, but at least Valve is looking for a solution to the problem. If it takes off we could see lots more developers releasing games for Linux, which will make the games more accessible to more users and, ultimately, make more money for Valve and the games’ developers.

Another issue is affordability. The X-bone/PS4 will cost around £400 for a decent bundle, and the games are expected to cost between £45 and £65 each! That is a lot of money, particularly in this financial climate.

We still don’t know what the specs of Valve’s own Steam Machine are yet, or how much it will cost. But there are apparently a range of devices in development. However, there is the potential (whether it is made by Valve or someone else) for a less powerful, more affordable console. It wouldn’t be able to compete with the new big black gaming monoliths, but it would be more accessible and have a wider appeal and may in the long run, turn out to be more of a money maker. It should also be noted that, while new games are sometimes delay arriving on Steam, they are often cheaper when they do so and drop in price more quickly once released. [I’ve already discussed, at length, how it is possible to make more money by selling things for a lower price – by giving them more accessibility and mass appeal]

Gimmicks and Charging for Features

Microsoft is the worst for this. Not only do they charge you for Xbox Live Gold, which you need to access online multiplayer and cloud saves, but they insist on including the Kinect camera with every X-bone console and it must always be on. Sony is slightly less evil, in that you can pay for PlayStation Plus, but it isn’t as important for online play. The subscription is, however, also required for PSN cloud usage. It should also be pointed out that the PS4 was also supposed to ship with the PlayStation Eye camera, but it was taken out purely so they could undercut the X-bone! True, you get free games and other good things for this subscription, but they (Microsoft in particular) more-or-less force you into buying it to use core features of the console – even things like Twitter and Facebook, which you can use for free on your computer, photos or pretty much EVERY OTHER PLATFORM!

The Kinect and PS Move are also pointless gimmicks that don’t really add anything to the gaming experience. They are not accurate enough and provide no physical feedback to the player so, while they are OK for drunken party games, they aren’t much use in more hardcore games. They’re just so much less accurate, less reliable and less immerse than just moving your thumb by a centimetre to push a button!

Valve on the other hand… Well, they don’t have any sort of subscription service. The Steam Cloud is available to all users (as long as the developers enable the feature in their games). What they have instead are regular crazy sales where games in the Steam catalogue old and new are reduced by up to 75%. You’ll also notice they didn’t announce any cameras or motion-control nonsense, instead trying to come up with new, more accurate and efficient ways for users to interact with their games with less latency. Their controller is different, and its hard to picture exactly how it might work at this stage, but you get the feeling they’ve thought about how most users actually want to interact with their games, and how such interactions can be improved, rather than going “wouldn’t it be cool if…”, which seems to be everyone else’s approach.

Yahtzee summarises my views on the next-gen in his Next Gen Buyer’s Guide, the only reason they need all these flashy launch events and spin-doctors to sell a console is “if it benefited the corporation selling it a f*ck load of a lot more than it would anyone buying the f*ing thing or anyone who just wants to play fun games.”. But Valve, who made its announcements on a simple webpage and without a flashy ceremony, seems to have the right idea.

The key difference here is that Microsoft and Sony and publishers who are only interested in making money, whereas Valve is a developer who actually makes games (occasionally!) and seems to have a much better idea of what gamers (and other developers, including the very creative and popular indie studios) actually want, rather than trying to sell pointless gimmicks to consumers, making people jump through hoops and forcing everyone involved to pay them through the nose for the privilege. Valve is also being a lot more open about their platforms, making it easier and cheaper for developers to make games for them.

The net result of all this is that I am now eagerly awaiting further news of the Steam Machines and my already limited interest in the ‘Next Gen’ consoles has all but completely fizzled out.